Some of the pics I have taken during my days at Gujarat.

As stocks have lost the flavor they had even two years, the conventionally considered safe asset has found a bullish market, thanks to the ease of trading, thereby inviting speculators.Gold has always been considered an asset for the lifetime. Selling or pawning gold to fund life’s expenses is considered an ultimate sacrifice in the Indian culture. But what if owning gold becomes a near impossible task? People tend to wait, people tend to speculate, and the end result is something we have seen: a bubble about to burst.

This article in ET tells us that gold is not a safe asset class any more. Rising prices of the yellow metal due to speculation leaves the spot buyers high and dry. For an ordinary Indian, gold has an emotional connect, much more than the speculation leaves us with.

There are many who are waiting for the bubble to burst; all that is needed is a trigger. Like crude prices, these will also reach more reasonable levels. It would be interesting to know when that would happen. The Indian market is limping back into action. If the equity market gets stable, we can expect the gold prices to come down.

Even I am eagerly waiting for the gold prices to plummet, I have some purchases in the pipeline owing to important events at home! 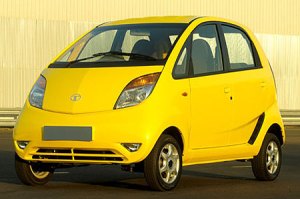 That was my feeling when I saw an article this morning on the TOI. The fact that Tata Motors expects some 10 lakh bookings over a period of 2 months, especially considering the fact that their plants are too incapable of delivering the vehicles even over a timeframe of one year, one is left stunned, if not confused at the audacity of hope.

Now as per the data in the article, the Pantnagar factory has a capacity of 3000 Units per month, while the yet to be built plant at Sanand will be able to produce some 250,000 per annum. Even if the latter rolls out at its full capacity at an early date (which appears too unlikely), we can expect only some 23,000 Nanos rolling out per month. To meet the estimated current booking of 10 lakh, it would take some 43 months or more than three and a half years. And we have not considered further bookings in the next few years. It will keep Indians excited, but not too happy.

The Tatas have played their cards well. With a booking rate of 70,000 INR per nano, it will improve their cash flow position drastically at some 7,000 crore. Considering this amount interest free, it would mean that the company will suddenly have a lot of money to be put into good use. This is the strength of a densely populated country with high aspirations!

Two more things amused me. First that the bookings are being accepted not only at the dealerships, but also at some SBI branches as well. It reminds me of the distribution of entrance exam forms! Secondly, who gets the delivery will be decided by a lucky draw. Schools do enroll kids using this method. From sophistication, we are now getting at the basics!

Each of the first lot of Nanos will be a collector’s item. And they will also make way to the black market. We might even expect auctions for these. Documentation will be a mockery, thanks to our RTO officials’ speed to handle transfers.

The world is changing, so is India. With time, a lot of things have become plenty, while scarcity has hit many. The government must keep at watch at such disruptive innovations, and make and enforce laws accordingly.

It struck me odd this afternoon when I saw the banner. Am I reading Gujarati correctly? Translated it is a life prepaid idea connection at Rs 5, and for Rs 10 you get the sim card free and the rest goes as talktime. Can it be real? I wondered. I decided to enquire at the shop. Well, it is an offer that had a ‘till stocks last’ clause, and they were then available for Rs 23! I went back to office, and my colleague amused me with an sms that mentioned an Airtel offer of a prepaid connection free of cost. Recession couldn’t get any graver than this.

The trends signify something deep: the penetration of mobile in our country and the rate at which telcos are luring customers to get connected. Was it long ago when being mobile was a fantasy? And that one had to shell out a lot of money just to receive calls. We’ve come a long way since then, but at this stage, where are we going?

I was wondering about the strategies of the telcos. It is evident that the mobile subscribers added per month do not show an increasing trend. Today most people are connected in multiple ways. Procuring packaged sim cards, managing their SIM and subscriber numbers, and the supply chain of taking these to the customer involves a lot of cost, which incidentally would be borne by the telcos. Giving away these for free for lifetime prepaid kind of connection implies you are allowed to be connected for free, by virtue of being an Indian citizen. Now, the customer is normally in the bottom of the pyramid where the ARPU will be as low as Rs 50-100 per month. Given that the service providers have covered the capital expenditures, this revenue might come out to be fairly decent. Of course, I need to get deeper into the cost structure to come to any conclusion.

It is good news for india, but it will also encourage misuse. One can buy a sim card and use it for making hoax calls or disturbing others, especially women. Companies need to be more stringent in their enforcement strategies, and government must take a call to punish those misusing the cheap technology.

I wonder why the handset leader Nokia has not brought out dual sim phones yet. May be they haven’t focused on the india specific strategy, but for sure they will find a lot of acceptance!

Post this afternoon, I was left wondering why I bought a Vodafone lifetime prepaid sim for 99 INR!

The dormant reading bug is out again. With rapid changes in my life, I had to force myself to concentrate on the seemingly more important aspects of life than reading. And the last weekend I was stuck between the want to read and the ability to skim through. My inability has been winning all through….untill I decided I needed a fiction to lubricate the reading machinery. And it worked!

I picked up Ken Follet’s The third twin. I am no literary critic, but the story and the style gripped me to the core. The story is about the side effects uncontrolled cloning. It was written in 1997, probably there was brouhaha about it. Events are mostly dated, for instance people don’t use mobile phones.

The story is about a researcher at the psychology department of a university analyzing the root cause of criminal behavior. And she compares twins who have been raised apart. And she stumbles upon some clues that lead to some horrific history, that had the potential to blow up a takeover deal. a typical thriller, but I loved it!

What’s more important is that I seem to have gotten back the ability to key down the contents of a blog post. Today I plan to pick up another one!

This time it’s a new project that amuses me till no end. These people are smarter in more aspects than one, and they want things to be done the Indian way; irrespective of how horrendous it might be.

Everything boils down to cost. Every implementation worth its name has a time frame which needs to be adhered. Yet this client feels they can take indefinite period of time to complete the job, since the contract does not involve duration. If it is so, its time to audit the BD team.!

The business practices have gone haywire, and they want such things to be tracked in SAP. It often comes to the brink of legal boundaries, and they expect such activities to be mapped as well. They do not know or care about best practices, for what they do is best.

The fact that the company makes huge margins obviates any changes. So why do they need the ERP for? So that they can tell their customers their company runs on SAP..for the first time I have the cognizance of its brand value!